Visit Beads of the World exhibiting at the Reading Room, Churchill on 8 to 9 October, and St John's Church on the 4th December, 2022. 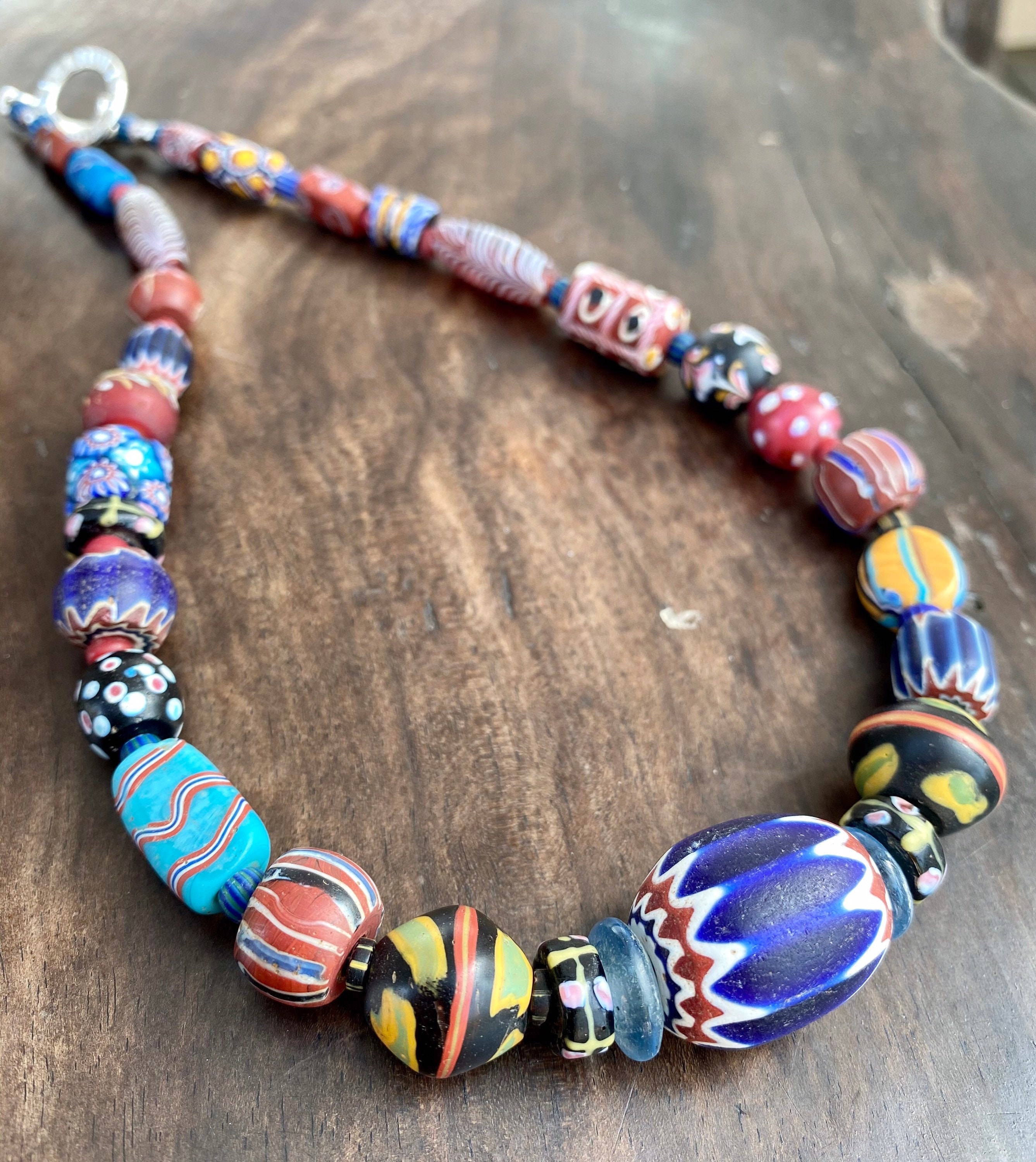 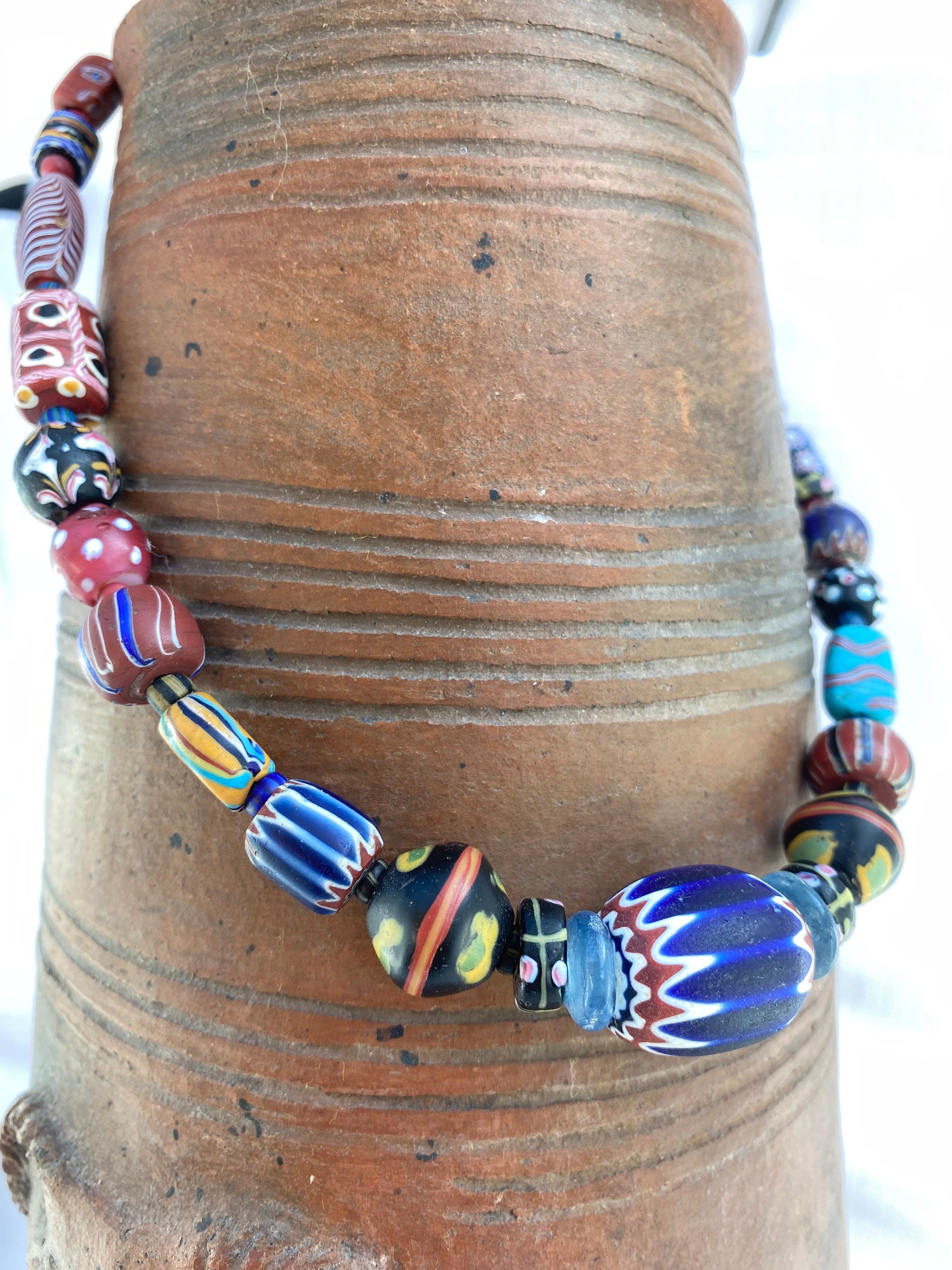 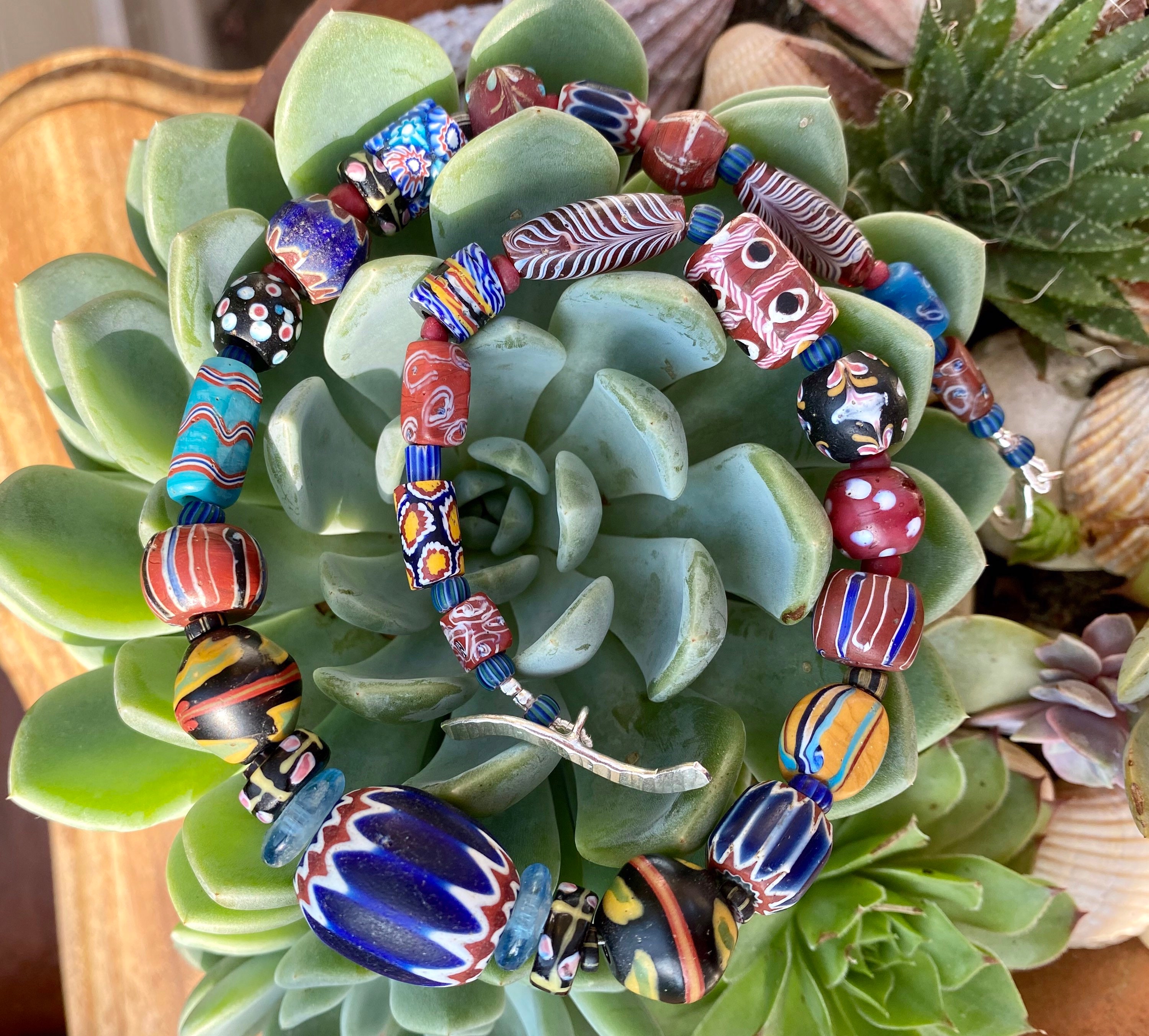 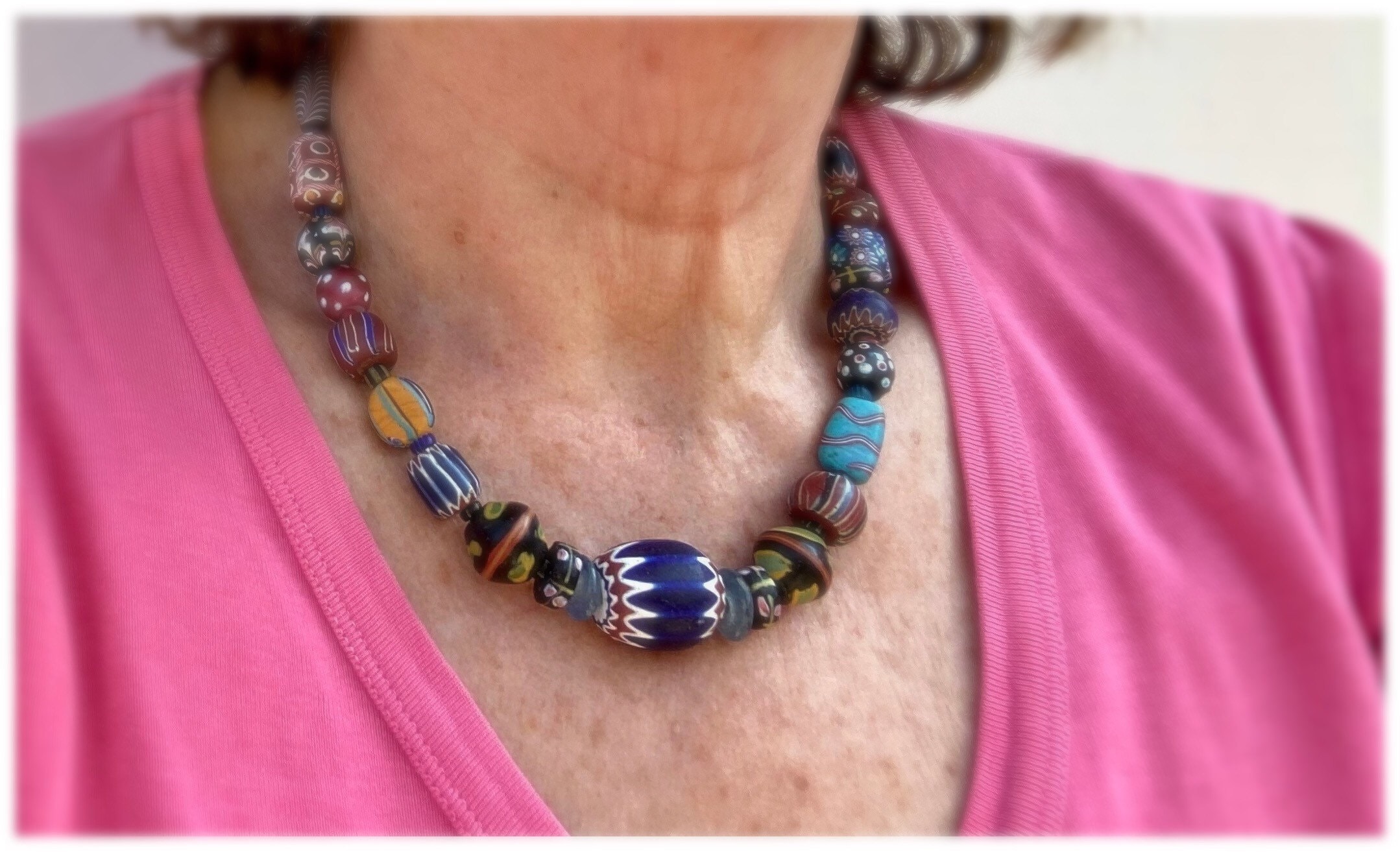 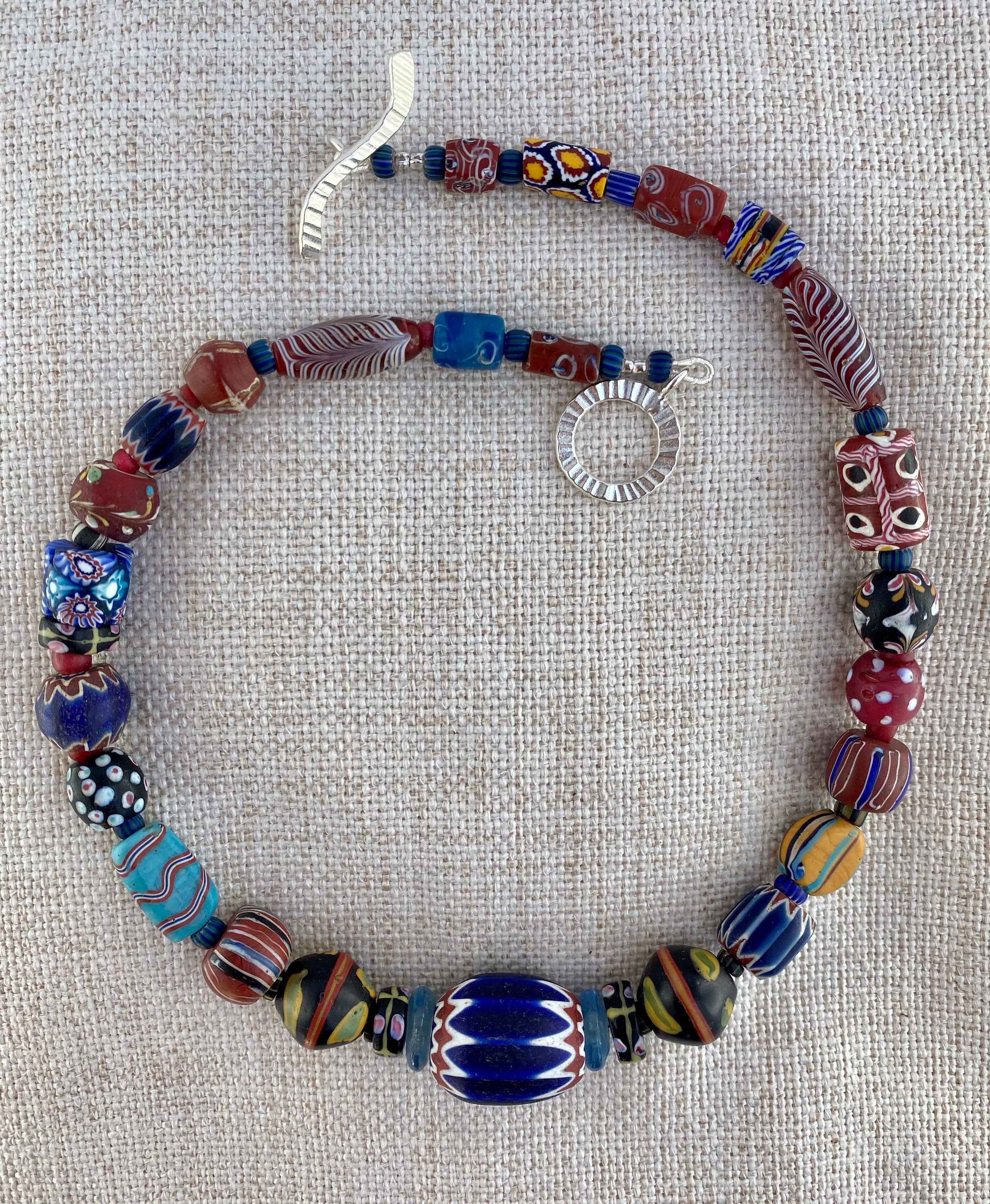 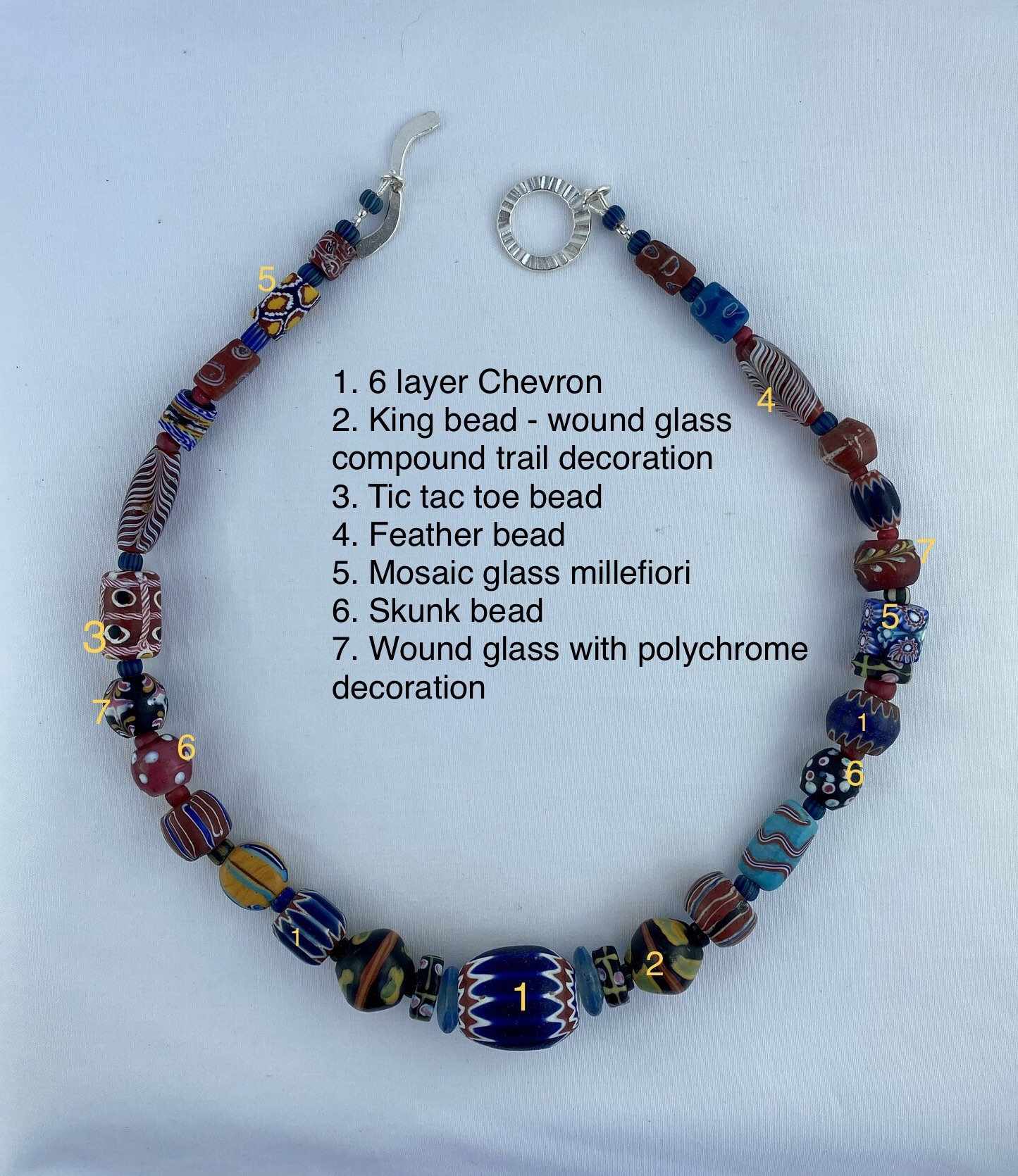 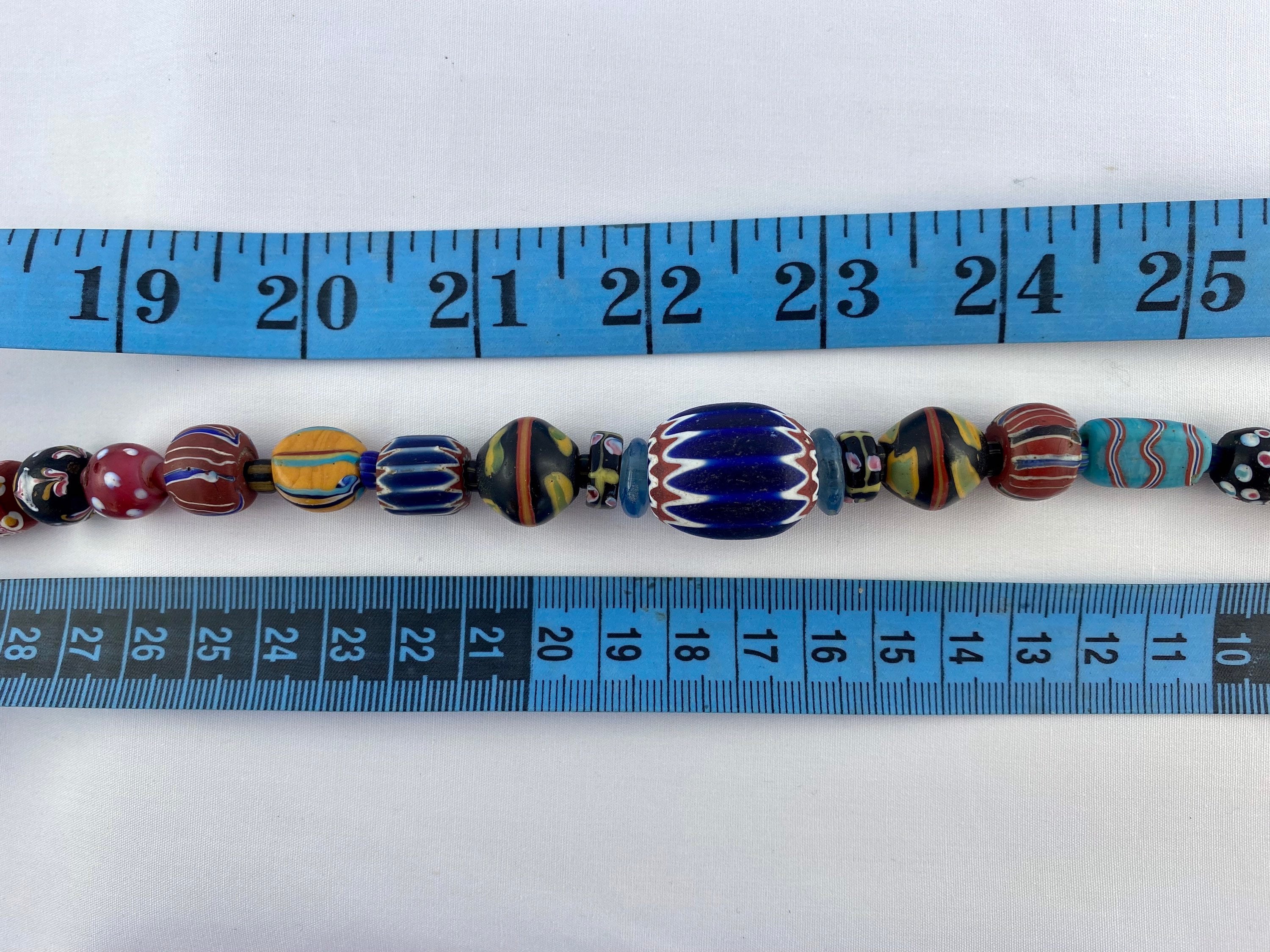 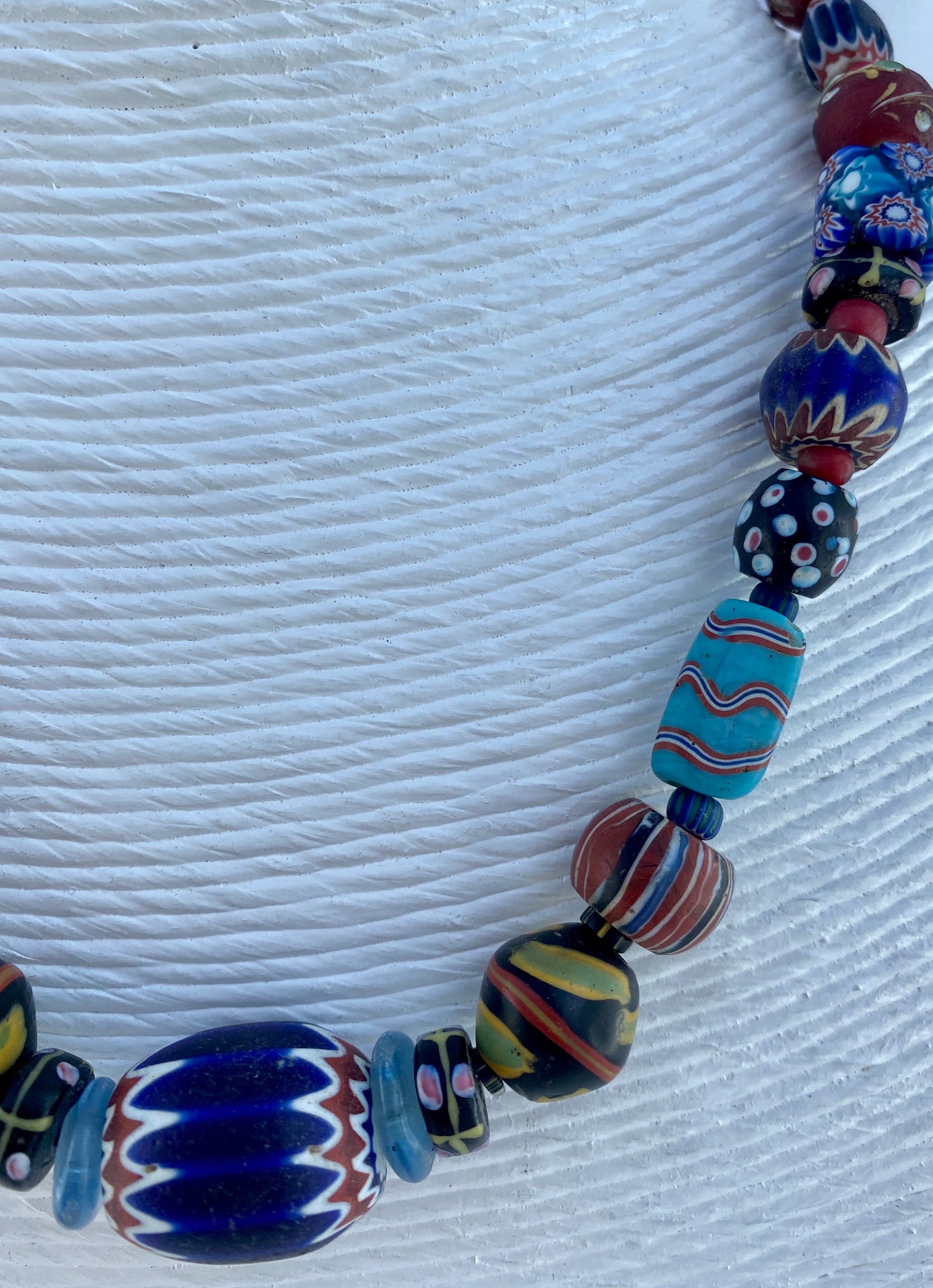 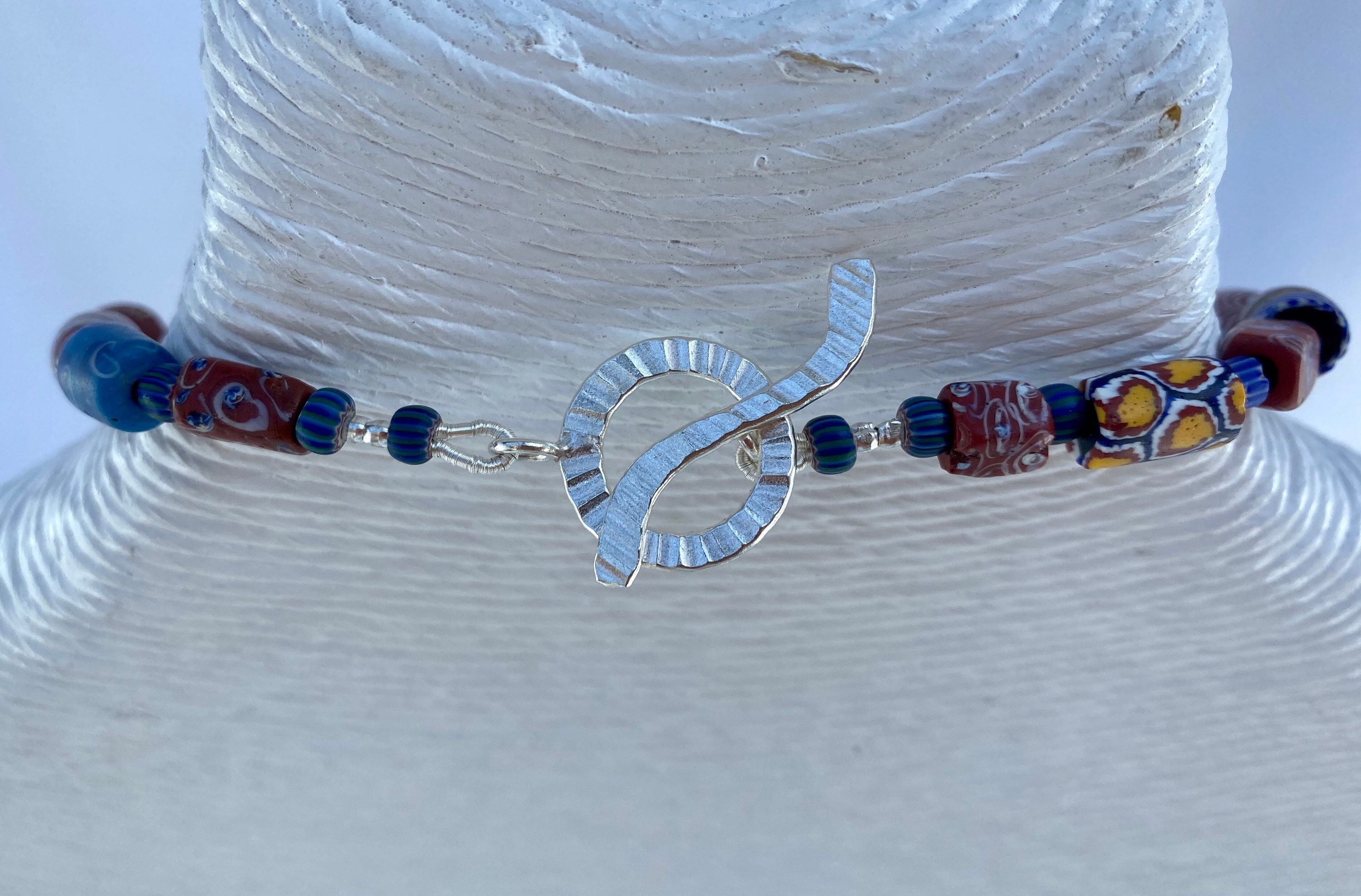 I made this necklace to showcase the beauty and wonder of old glass beads. The design is based on one shown in Angela Fisher’s classic photographic book 'Africa Adorned' (1984) which documents the exquisite jewellery and body adornments of tribes throughout the African continent. When you wear this necklace not only will you think of the present times but it links the arc of history at the same time.

This necklace is a mix of Venetian glass beads dating from the 1800’s. Venice was the centre of European glass bead making from the sixteenth century where huge quantities were made and shipped to Africa and north America for trade.

The central lapis blue bead (1 on second picture) on this necklace is a six-layer chevron, the aristocrat of beads, measuring 9/10 of an inch or 22mm in length. Chevrons have a complex manufacturing process, including compounding, moulding, drawing and dividing of the glass and then finishing by hand. They are sometimes called ‘rosetta’ or ‘star beads’ as the rounding of the ends produces a 12 point star pattern. There are two other smaller chevrons on this necklace and even some of the small blue and black spacer beads are chevrons. The black bicone beads are called King Beads (2) and are wound glass with compound decoration probably dating from the 1850’s. These and the chevrons were prized by kings hence their name. The brown cylindrical bead is called a tic tac toe bead (3) with reference to the pattern on it and like the king beads were made to mimic African designs popular at the time. The red feather beads (4) were made with red glass and a dragged feather decoration. There are three mosaic or millefiori designed beads on this (5) necklace. These beads were made in huge numbers in a myriad of designs using cross sections of canes melted on to a black core. The blue one shows the cross section of a small chevron cane. There are two spotted ‘skunk’ beads – one red and one black. The origin of their name is believed to come from the north American market though nobody is very sure. The red bead (7) is a white heart or a Cornalline d’Aleppo with compound trailed decoration. This is a two layer compound bead with a white centre and red trailed glass over the top giving a beautiful depth of colour. The red colour comes from gold oxide in the glass and is why the beads were made with the white centre as it was not so expensive. Over the years this white centre has added to their translucence and given them their name.

All the glass beads have a beautiful patina suggesting their age and the odd chips and pits are to be expected. I only know the recent past of the beads on this one of a kind necklace - they deserve a new and loving home to take them onwards. They will last many more lifetimes if cared for. Give this as a gift that makes someone think of you as well as the arc of history that is stored in these beads.

The necklace measures 17.5 inches/ 44cm long and has a Thai silver clasp to close it.

It will come gift wrapped in a box and carefully packaged.

I gladly accept returns and exchanges

Ship items back to me within: 30 days of delivery

But please contact me if you have any problems with your order.

The following items can't be returned or exchanged

Because of the nature of these items, unless they arrive damaged or defective, I can't accept returns for:

0 items in your cart